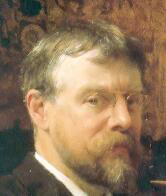 He was born in Dronryp, and began his studies at the Antwerp Academy, and worked with Baron Leys, a historical painter. Then Ernst Gambert, the Belgian international art dealer who found the young man’s work promising, commissioned forty-four paintings. These works were eventually shown in England, where they caused an instant sensation. Alma-Tadema moved to London and became a major figure on the Victorian art scene. A story-telling painter, whose images were marked by Victorian soft-core eroticism, he was both immensely popular and thoroughly despised by the modernist painters and critics, as representing everything against which they were in rebellion. He liked to paint imaginary scenes of life in ancient Rome in a detailed, “realistic” style. He was a very proficient painter, as well as a very popular one.